(This article ran in both the Brandon Sun & on the website BdnMb.ca )

BRANDON, September 27, 2018 – University Ward candidate Shaun Cameron has called for a safer crosswalk to be installed at the corner of McDiarmid Drive and Victoria Avenue. “As a resident of the ward, I’m committed to listening to the needs of my neighbours. This crossing is something that has been brought to my attention by a number of residents while on the doorstep, and I feel the time is right to look at increasing the safety here.”

The corner, which is an intersection of both a provincial and municipal road has become an increasing concern to residents who live close by. With its proximity to Vincent Massey High School, Valleyview Centennial School, and multiple high-traffic retail and food establishments the corner continues to be a challenge for residents and motorists alike.

“Area residents have shared with me that they often don’t feel safe crossing at this corner. I know personally, it is a challenge due to the grade of the road coming into the corner, and the fact that some of the highest traffic times, such as early mornings, include drivers driving into the sunrise. I think having a lighted crosswalk or a traffic control device would be a great first step to ensuring we can avoid an accident.”

One such resident is Marion Conley. Conley, who lives near the intersection shared that there is a “lack of judgement when it comes to safety at that corner. As a resident of the area I cannot understand why there isn’t better traffic control at the intersection.”

Cameron shared that he has taken the opportunity to reach out to the Minister of Infrastructure for the Province of Manitoba Ron Schuler, and is hopeful that his concerns will garner a response. “I’m hoping that we can take this as an opportunity to have further dialogue on this important concern. As a parent of two young children who are active in the neighbourhood, I feel that their safety, as well as others throughout our community is of the utmost importance,” he shared. “I have visited with many residents who have expressed the need, so it is incumbent on me to listen and, where possible, seek a solution.”

Cameron shared that he has been meeting and visiting with residents of the University ward since May of this year when he announced his intentions to vie for city council. The announcement came following long-time councillor Jeff Harwood sharing he would not be seeking re-election. “I truly enjoy being active in our community,” Cameron said. “I see this as an extension of the work we have undertaken at our local community centre and I want to continue to build for the future of our community, with safety being one of those key pillars. I hope that I’m able to continue this work following the election.”

Cameron welcomed residents to check out his website for further information on platform items and other useful information about the election. Visit cameronforuniversity.ca for more info. 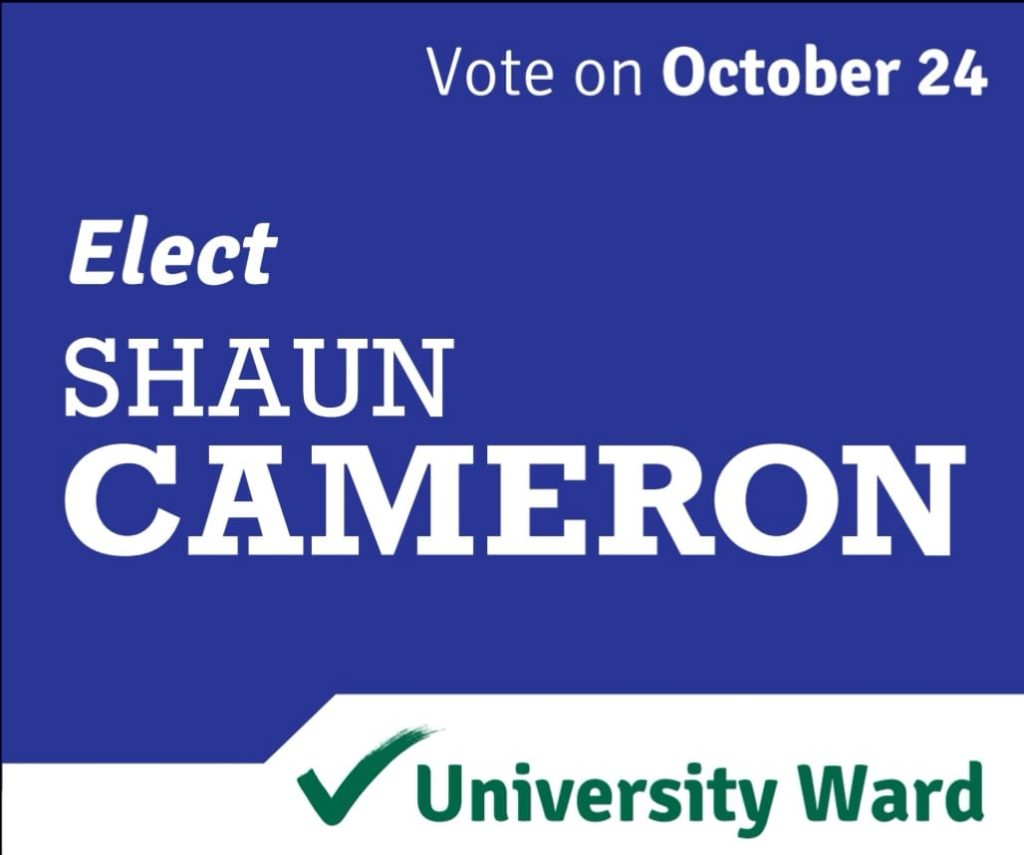